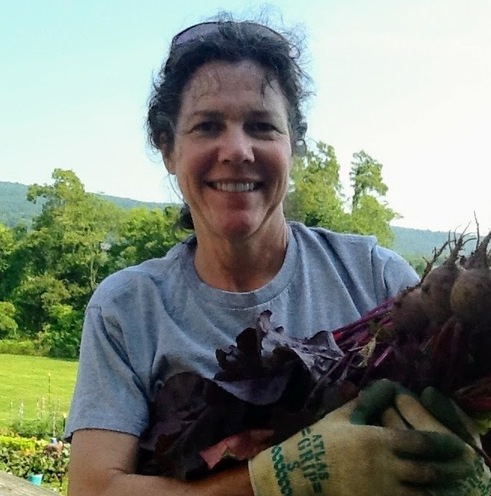 Becoming a fiber producer takes many skills.  Most are multi-talented individuals that are competent at many things, capable at many more, lifelong learners who believe in connection between people and the planet, with a willingness to be helpful and a can-do attitude. When I met Kathy Reed of Briesbrook farm, that pretty much summed up my first impression.  Kathy describes herself as “terminally curious Jill-of-all-trades” and for her, one thing always seems to lead to another.

Kathy’s first career was in human resources for the Navy.  She and her husband would frequently be stationed by the sea or in the national capital region, moving nearly 20 times in as many years.  They would often talk about where they would live when they could choose.  They knew they wanted more space and someplace cooler than Florida.

Moving back to the northern Virginia area in 2011, they found their farmette and settled in.  Her husband swears they chose Loudoun County, Virginia because they watched a 2008 series on Notavita Vineyard on HGTV’s Dream Houses.  Once they had some space, becoming a fiber producer seemed like a logical next step.  “I’d always wondered about the process of making yarn and thought it would be cool to raise my own fiber.  I liked knitting with alpaca and on a winery tour in Virginia, I met my first alpaca. That was it, over the edge we went.”

“Meeting that alpaca got me started on fiber animals. Then I met a cashmere goat!” Since the alpacas aren’t overly friendly, she was drawn to the idea of raising goats with their more gregarious personalities.  In 2014, Brian, her husband and chief enabler, suggested they go see the cashmere goat kids at a local farm.  They came home with 3 – then went back for two more.  Kathy and Brian now have seven cashmere goats, two dwarf  Nigerians and four alpacas.  Kathy likes the lack of lanolin in both alpacas and cashmere goats since the fiber will last longer, even in its raw state. In addition, both fibers are light weight and very warm which makes them easily worn in the Virginia climate. 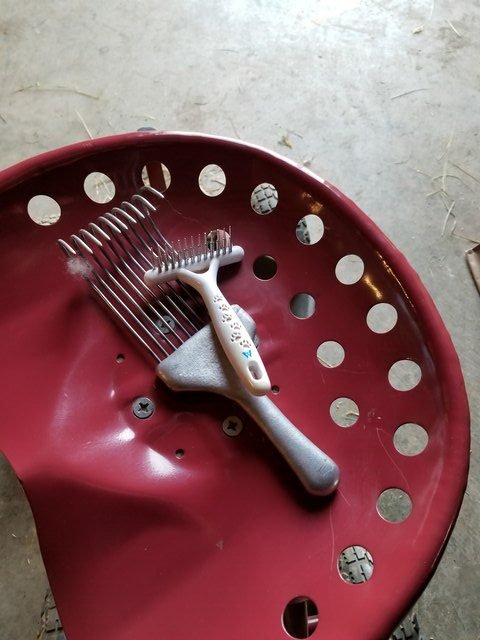 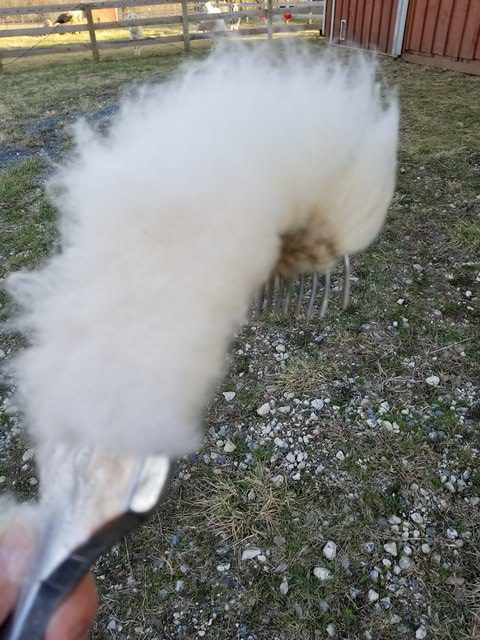 Late Winter into early Spring includes combing the goats for their cashmere. She uses purpose made curved hand combs, hand molded of duralumin in Kyrgyzstan.  Combing each goat takes about 30 – 40 minutes depending on how motivated they are to participate in the process. Each goat is combed on at least four or five different occasions over a 2-3 month period. “We have a shearer come in for the four alpacas. They are definitely NOT motivated to participate in the process and so it’s a team effort.”

“The most surprising thing I find about raising fiber animals is that the annual harvesting of the fiber is just the tip of the iceberg! The critters have so much personality and my daily routine revolves around their care and feeding. That’s not a bad thing. Goats, in particular, are always happy to see you. Alpacas are more like tall cats. Only when you have food and they are in the mood to bless you with their attention.”

Kathy’s been a knitter since childhood.  She was a fidgety child and caught the knitting bug from her mom.  “I’ve been knitting on and off as long as I can remember, pretty much daily for last 20 years or so”.  Once on the farm, Kathy got certified by the Craft Farm Council to teach knitting.  She loved the teaching but didn’t like the synthetic yarns that were used in the class and became determined to learn more about how to make yarn.  She joined the local fiber guild and met amazing people – weavers, knitters, shepherds – and got exposed to lots of other fiber arts.  Although mostly known for her knitting skills, she also weaves, spins, felts, and embroiders and loves doing it all.   As for knitting with her own fiber, “even though I love knitting with both alpaca and cashmere, I haven’t actually completed anything with fiber from my animals. I’ve processed some of the fiber but seem to have a case of “paralysis by analysis” as to what to make with my precious fluff.”  Kathy is participating in the Sustainable Cloth Challenge, using a small amount of cotton fiber that she’s grown and processing herself, learning more new skills along the way. 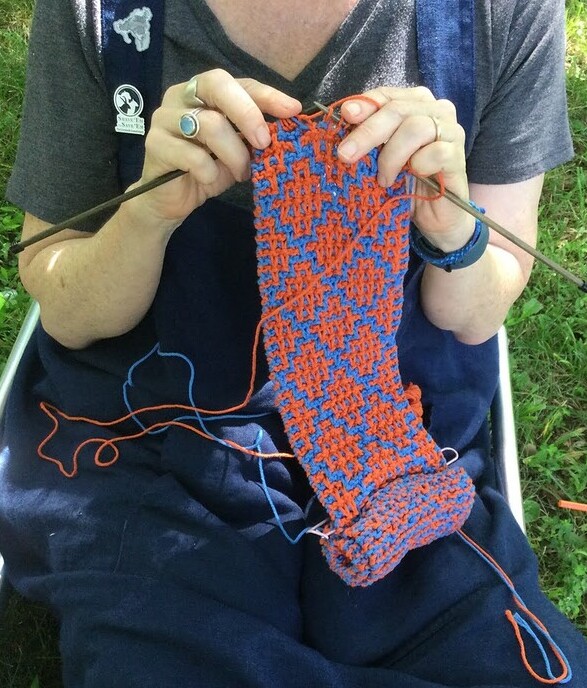 In her quest for yarn knowledge, Kathy came across Solitude Wool and learned about breed specific yarns.  When they approached her about becoming a partner in the business, she jumped on the opportunity to learn about dyeing, entrepreneurship, and how to design yarn.  Always curious to learn more, Kathy relies on her own research, as well as on others in the fiber community for information including the state cooperative extension, local fiber guilds, fellow farmers, and our fibershed.  “Sharing information is key for us all in learning how to create and replenish something so essential as the fiber we wear.”

You can see Kathy’s yarns and knitting patterns at Solitude Wool. 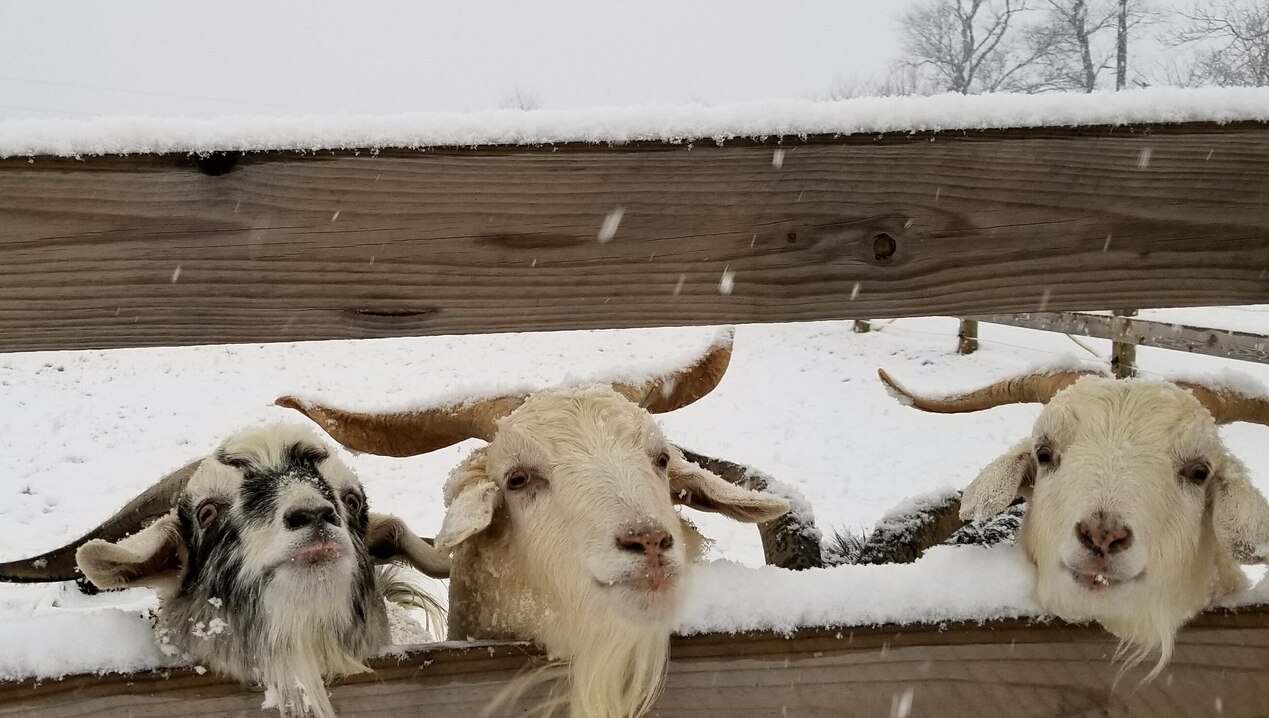 3 thoughts on “Our Fibershed Stories – Kathy Reed of Briesbrook Farm”